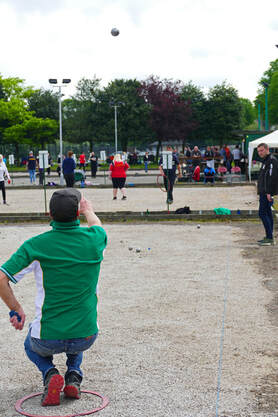 Qualification event held at Nottingham, to represent England in the 2018 Home Nations Tournament.
Pétanque is a sport that falls into the category of boules sports, along with Raffa, bocce, boule lyonnaise and to some degree, lawn bowls and crown green bowling. All of these sports share something in common, in that players or teams play their boules/balls towards a smaller target ball. In petanque in England, this will commonly be referred to as the jack, cochonnet, or coche.

Not only are players of all genders and abilities able to play together, but petanque is also well suited to disabled players joining in with those who are not disabled.
​
The aim of the game is to be the first to score thirteen points. Points are scored by having one or more of your boules closer to the target than those of your opponent, after all boules have been thrown. The game is played out over a series of rounds, often referred to as an end, with the scoring team of an end being first to start the next round. Pétanque isn't just about throwing your Boule to get as close to the target as possible (a method known as pointing, from the French pointer). You might also choose to shoot, or fire (tir in French), that is, to try to knock your opponent's boule out of the way. It's a game of tactics and psychology, with the decision of whether to shoot or point one of the critical tactical options. A simplified description of the rules can be found here.

Whilst pétanque, like many other sports can be played socially, it is also played competitively at regional, national and international level.
The  world governing body for petanque is known as the Fédération Internationale de Pétanque et Jeu Provençal (FIPJP). In England the governing body is Pétanque England. Nottingham City Petanque Club is affiliated to Petanque England, and is part of the Mercia Region, which covers Nottinghamshire, Derbyshire, and Licolnshire.